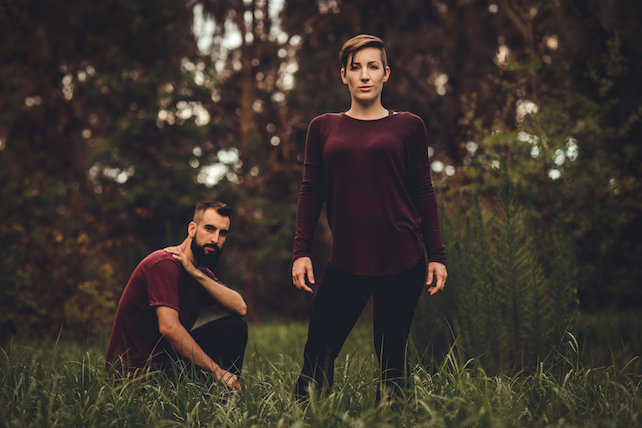 "What stories can we tell?" — Bonnie Subey Explores and Expands West Coast Swing

Bonnie has an exploration running in the back of all her dancing: she wants to know what kinds of stories can be told in a partner dance.

"Not all stories can be told with two people. It's why we get so many broken heart stories. So I'm really interested in what can be told." By story, she doesn't mean "plot" in the tradition sense but a dynamic, a feeling, an energy between two people.

And no one pushes the boundaries on creative art like Bonnie Subey.

One of the most memorable pieces she's done in West Coast Swing was her first classic piece with her dance partner and husband, Jerome Subey, which they call "The Viking Dance". The piece was abstract and very different from a standard classic piece. They wore sackcloth costumes and dark eye make up. "Whatever it was about," Bonnie laughs, "it was certainly different. And it stood out. That didn't make judges love us — we got last nearly every time — but the audience remembered us. We became known for being creative and different."

Pushing boundaries is central to the creative work she and Jerome do together and will continue to do. The last two years, their routines were put together by their coach, Robert Royston. Now that they better understand what goes into a good routine, they are excited to return to infusing more of their own style and storytelling in the process. "Finding the emotion, finding the story telling, not just dancing the moves. That's part of our aesthetic," Bonnie said.

Bonnie's journey with west coast swing began at an early age after the loss of an important person in her life: her dad. He passed away when she was thirteen. Almost a year after his passing, Bonnie had her first introduction to west coast swing. Her mom decided to try a dance class for something to do and Bonnie thought it sounded fun. She'd loved polka dancing as a family when she was a kid and she'd also started to explore belly dance.

She knew that dance was going to be in her life forever.

She ended up following her older sister to Philadelphia and attended Temple University. Originally, she was going to get a business degree with a focus in entrepreneurship, thinking she would someday run a dance studio. The program ended up being too corporate for her. She joined the theater department so she could be as close to dance as possible (she didn't have the dance background to get into Temple's dance program).

During this time, she'd been dancing socially in the Philadelphia area, but began to doubt that west coast swing would turn into the dance career she'd imagined for so long. That began to change when she met a tall Frenchmen named Jerome who sported a mohawk not dissimilar from her own. They met June 22, 2012 at Liberty Swing. Six months later to the day, they got married and began a dance partnership that would make hard work and innovation central to their creative life.

Five years later, Bonnie is the first to say that it's been a long road from partnering with Jerome to becoming a champion dancer in her own right. And she's asked herself more than once whether she wanted to put in the work to make it where she wanted to be, to be seen and known for what matters to her. "That question has been the hardest part of my work, especially when dance stops being fun and becomes only work," Bonnie said. "Sometimes it's hard to dance and even harder to feel good at it. I have to ask all the time: do I still love this dance? And the answer is yes, I do. That's why I keep training and growing." One of her new years resolutions is to learn better habit-forming practices and create rituals that make it easier to do the hard work of dancing.

Bonnie is one of the emerging voices among the champions in west coast swing who are beginning to talk openly about the emotional cost of being where they are. Bonnie said that over the years, the emotional question has changed. "The question isn't 'Can I do this?' but 'Will I ever feel good enough?'" And that's a very different work than a simple rise in skill level. Talking about this part of dance requires a humility and vulnerability that is the mark of the best dancers in our scene, one built on human relationships and interactions more than performance based metrics.

Bonnie Subey emerges more and more into a style that can only be described as her own: grounded, technical badassery. She manages to possess both a sassy performative public style and simultaneously explore an interiority, a private experience-you get the sense that Bonnie isn't dancing for the audience but entirely for herself, her own experience, her own self-expression. It's compelling and impossible to look away from. She's doing both the public work of technical growth and the private work of personal congruency on the dance floor.

Part of that private work is learning to have public expression at all. "I used to be a very shy person," Bonnie said. "It took me a long time to figure out how to come out of my shell."

One of the critical turning points in her feeling like a successful champion was winning second place in a strictly with Matt Auclair at Swing Fling last year. This had special meaning for Bonnie because Matt Auclair was one of the first pros she ever met. He visited her hometown of Oklahoma City and gave workshops at her studio when she was around sixteen years old. She ended up performing with him for a spotlight demonstration after the workshops. "I had never performed like that before and it was the first time I really broke out of my shell. We were goofy and energetic and free. Fast-forward to years later, I get second place with him in a J&J! We were both so excited."

It is this personal work, like emerging from shyness into goofiness, that Bonnie is most proud of. "I'm committed to what I think is important: connection and controlling of my own body." She's also proud of proving people wrong, like people who insisted that being a dance teacher wasn't a viable profession. "I'm doing the thing I set out to do and I'm so proud of that."

This year will be Bonnie's fourth at Camp Westie. She and Jerome have been with Camp from the beginning. As a veteran, she's seen it all, from our first year with twenty seven people to last year when we maxed capacity on the floor. "Camp Westie is away from the rest of the world and the worries of the world. I also love that it's really small and intimate and you can get to know people, which isn't really possible most of the time."

Bonnie brings a unique teaching style when paired with Jerome's. As a couple, they are very technique based instructors. "We want to give people tools they can use at home and on their own," she said. "People think they are stuck if they don't have a partner and that just isn't the case." And they are also committed to making technique fun, something they've certainly done every year at Camp Westie.

When asked what her favorite part of camp is, Bonnie answered: "The Magic Mailbox." This is our camp mailbox where campers leave encouraging notes for each other. It's a big paper fest where we share verbal support for each other. As Bonnie said, "I love when the love is passed around."

And she has a message for new campers! "You might be a little intimidated at first, but camp is really good at breaking down people's walls and allowing you to express yourself without fear of judgement."

Join Bonnie and the Camp Westie staff this April!

Camp Westie takes place April 13-15, 2018, just outside of State College, Pennsylvania. Join a small group of dancers for intimate workshops, delicious home-cooked food, a raucous good time, and a breath of fresh air. There isn't another event like it.