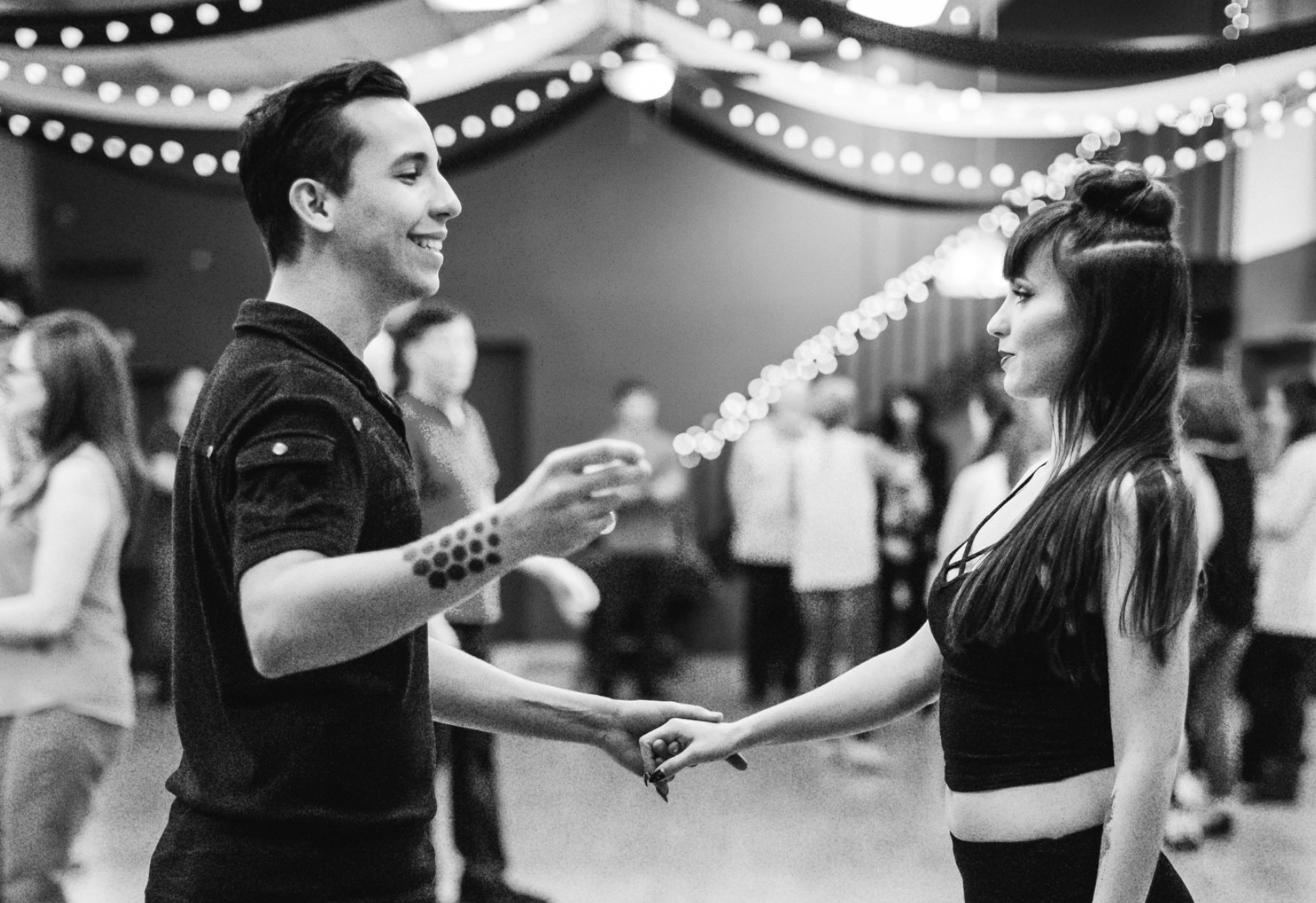 Hugo describes himself as a "mix of a hippie and a drill sergeant," two sides that when combined give him a unique and powerful edge in west coast swing. First, he's creative in how he approaches both his dancing and teaching. And then second, he's obsessed with the details of the dance. He knows there's always a new way to elevate his dance and the dance as a whole—and this creative and rigorous process is the heart of his work.

Dance wasn't on Hugo's radar as a kid growing up outside of Miami, Florida and learning martial arts. But dance showed up anyway in high school when his friend taught him dances so they could show off together at school dances, doing back flips off each other. "The whole point was to wow the crowd, get a jam circling going," Hugo said. "But we only knew a few moves. Mostly, we'd make things up."

Dance became more real when they decided try out for the school dance team. Without any real training, Hugo learned the audition dance and stayed up all night practicing. Out of 200 students who auditioned, Hugo was chosen for the small competition team of 20 students. This sparked an overall interest in dance which led to salsa lessons where he progressed through all of the levels in a few months. This led to teaching through Fred Astaire and competed in American Rhythm and jive. He also worked as a dance entertainer, essentially, a hype man for clubs, getting people energized and on the floor.

But dance still didn't seem to be his future so Hugo left ballroom and teaching and went to school and got a job. He worked for an insurance and investments company and was promoted to district leader with fifteen people working under him. He was doing well but didn't enjoy how much time he spent working. So when the chance came to work at an independent dance studio in Fort Meyers, he took it.

In 2009, as part of his job, Hugo attended Tampa Bay Classic and saw real west coast swing for the first time. He'd seen it in dance studios before. "I really thought it was a version of jive because the dance is so different in the ballroom world," Hugo remembered.

Seeing "the real deal" was a revelation. First, there were dancers under the age of 50, a rarity in the ballroom studio world. He could see the potential for a dance that would grow and change. Second, was the chance to see pros social dance. Back in 2009, pros would consistently show up at 3am to dance with the "die-hards". It was game changing for the rare dancer awake that late to dance with the pros and watch them dance together. Third, Hugo met Tatiana. In fact, he didn't just meet her but asked randomly her to dance after she finished teaching a lesson to someone else. "I don't recommend this move," Hugo said. "I can't believe I did this knowing what I know now about how busy it is as event staff. But I asked if her if she wanted to dance. No one else was there, just me and her. I don't know why she said yes but it inspired me in a big way."

Hugo began to concentrate his efforts on west coast swing and put together a routine for rising star.

It would be eight years until Hugo and Stacy took 5th in Classic at the US Open. Those eight years were filled with long hours of work, incredible growth, and amazing accomplishments. And it was in those eight years that Hugo met the two great influences on his dance life: Stephen White and Stacy Kay.

Hugo was in novice as Stephen was beginning all star and his professional career. They were both goofy and intense and hit it off immediately. Together, they would argue endlessly about the technicalities of dance. Their friendship became a cornerstone of his work. "I have worked through most of my ideas in dance with Stephen," Hugo said.

The second influence is his life and dance partner, Stacy Kay. They met on a dance cruise where he was an instructor. "She was just beautiful. I saw her looking at me when she got on the bus so I made sure to introduce myself and say, ‘Hi. I'm one of the instructors.' I played that up so much to be impressive." Today, they have a goofy picture in their living room from that cruise of the two of them and Stephen. Hugo laughs and says, "It's the perfect representation of my life back then." It's a reminder of where they began and how far they've come and the people who were with them the whole way.

When asked to describe his partnership with Stacy partnership, Hugo said, "Passionate. Hard and rewarding." Hugo noted that they each have their strengths and push each other to be better at every step of the way. Hugo is a mathematician with counts and timing and specifics He can remember routines in complete detail that he worked on 7 years ago. Stacy is the master of storytelling. "She knows what she feels and won't hesitate to communicate it. It makes her sure of her choreography where I might doubt myself. I don't think I'd grow nearly as much if we both weren't as passionate as we are. It's gotten us far because we always push each other," Hugo said.

For Hugo, his own personal approach to the dance and technique came out of these core relationships. But his style came through careful study of his favorite dancers and practicing to imitate their strengths. Hugo is fascinated by the process of deconstructing and restructuring the styles of the greats. "I'm all about the mix and match. I've studied everyone you've ever heard of and taken what I wanted from their styles. I have a look that is me and I'm always trying to get as close to the perfect, well-rounded dancer I have in my head," he said. As an exercise, he recommends students note the top five dancers they admire and write down what you love about their dancing. This list becomes your personal goals for your own dancing and what you bring into your practice. It gives you a rounded approach to working your skills and imitating your idols in very technical ways. Hugo is constantly looking to learn and grow in his dance and says that, "I want to have new information all the time. I'm always looking to be inspired because I want to be someone who inspires."

Solo dance has become an important practice that inspires his dance and teaching. Hugo observed that, "Solo dancers know how to teach and draw on narrative. These people are on tv and making a splash and they are accessible in conventions that are not too different from the big west coast swing events. We get to learn from these big name choreographers and it's a significant aspect of our growth." It was at these conventions where Hugo and Stacy picked up two of their signature teaching features: the pre class warm up and post class pep talks.

As Hugo said, he's "part hippie and part drill sergeant." Both of these energies play a big role in the space he builds in a classroom, where teaching is seen as a creative practice and mutual respect and positive mindsets are central. From the creative side, Hugo wants to be known for their vivid descriptions that allow all types of learners to connect with technique. "I like to paint with colors and pictures. It's so important to give the right pictures to new dancers so they know what they are building towards." And this also plays out in the tone of the class. Hugo observed that, "We are very big about respect in the classroom. We expect respect and we give it to you in turn. We reciprocate the energy in the room and we'll help them increase that positive energy." Their teaching style ie very active and engaged, an energy that invites every student to be as present to the work as they are. "We're very tuned into our students when we teach: we noticed body language; we meet eyes with every dancer in our classes."

2019 was an intense season of launching the studio, choreographing pro am routines, and travelling regularly to compete and perform. With this intense workload, Hugo is ready for Camp Westie and a weekend out in nature, where chilling out is built into the experience. "I might just take a second to not talk. That's so rare for us."

Also. "I'm excited about the teams because I'll get to beat Stacy at something." Hugo laughed when he said this but it was clear he wasn't kidding!

Hugo, we can't wait to have your drive and creativity and competitiveness at Camp Westie this year! See you in April!