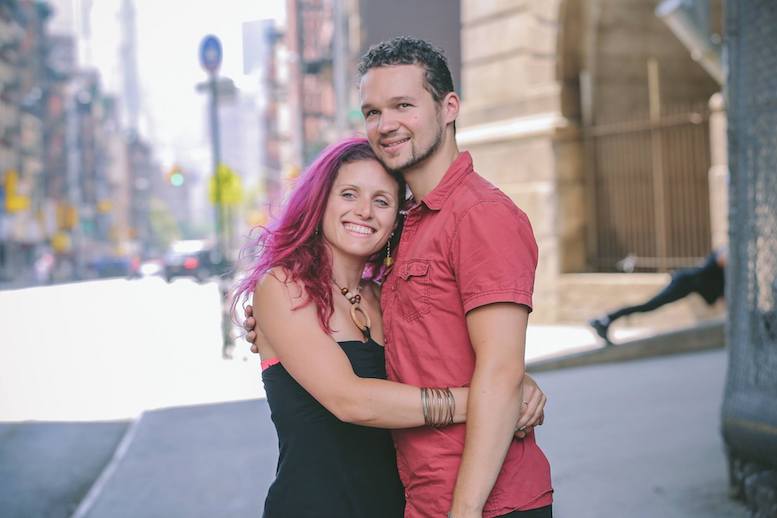 It started with Mary Poppins. Philippe and his sister were obsessed with the movie as a kid and kept telling their mom, "We want to do that!" What "that" was wasn't clear at first until she figured out that they meant the tap dancing. They were enrolled in tap dance classes and the journey with dance began!

Tap. Figure skating. Ballroom. West coast swing. Philippe has a technical background in all of these dances and a commitment to precision, to clean lines, to musicality that runs deep throughout childhood and his young adult years. It led to him turning professional ballroom dancer at age twenty-five. During that career, he began to partner with Flore when they were both looking for new partners in their different dance styles. Ballroom was their primary dance until they chose to focus on west coast swing. Their last competition in ballroom was the World Championship in 2016, October. "Really, we only stopped because the championships were right before the US Open. We had to pick."

And this new dance fit them really well. "Flore would get bored with ballroom," Philippe observed. "For me, improvisation was dancing my normal routine with a different partner! For her, doing the same routines all the time was just boring." They began to look for a new dance they could share together that would accommodate his preferences in technically precise dances and Flores deep passion for partner dancing. She'd already excelled in salsa and danced professionally in rock and roll and boogie woogie. That's when she mentioned west coast swing. "You can do routines in west coast swing!" Flore promised.

They gave it a try and were hooked. For Philippe, it answered all of his requirements for great dancing. "I love from ballroom because the music changes," he said. "I'm mad at one style, I can change the song to something else, where salsa and lindy are tied to one style of music. In west coast, the constant is the connection. The music is always different and you have the freedom to do what you want and be connected to another person at the same time."

It also fit Philippe's engineering-like approach to dance. He loved ballroom because of how it's built to be clean and straight and precise. It made it hard to embrace enthusiastic and high-energy dances like lindy, which are based more on momentum and play than clean lines. "In west coast swing, you get the best of both worlds. You have this strong technical guideline. You also have freedom in the overarching technique. It's why we do routines because I like having perfection in my dancing, to work to do things the best way they can be done."

That precision paid off in big ways. In 2017, they placed fourth in the showcase division at the US. Open and fifth the year prior. "This year meant the most to us. In 2016, it didn't seem like the right placement because some great dancers had rough runs," Philippe noted. "It just wasn't an even evaluation. This year, everyone did so incredibly well. The performances were amazing. Getting to be in the top five of that run was amazing. Top moment as a dancer for sure."

Philippe's greatest challenge in west coast swing has emerged as the natural opposite to his strengths in technical precision and performance: social dancing. "I'm still learning how to just be in the moment and enjoy the dancing," he said. "That can be very hard for me because I naturally want it to be very clean and precise. Trying to be okay so I can be crazy when I'm dancing. I don't have to be 100% technician." He practices what he tries to get his students to do: believe in themselves. "I work on trusting myself and letting myself be crazy when I dance like I am when I teach!"

Philippe laughed as he shared his challenges as a social dancer. "It's about leveling up to Flore. She's so good!" He explains that Flore always took to west coast swing like fish to water. "For years, no one would talk to me and they'd only praise Flore!" He laughs again and said, "Now I'm proud people know my name!" There's a sense that he says this with pride as well. He values Flore as his dance and life partner and admires the work she's done.

The real west coast swing journey began once they moved to Canada in search of more swing in their lives. At first, they thought it might be lindy that they gave their time to. But no, west coast swing had them in its entrancing grip! "The community in Montreal has been amazing," Philippe said. "All the people are behind you and cheer for you. That's awesome to have a community that believes in you. That really helps in self confidence." Today, they've been in Canada for four years. Their first event in actual Jack and Jills was Swinging New England in 2013. They teach regularly in their new home community in Montreal as well as at events around the world.

Teaching west coast swing started soon after they discovered the dance-whether or not they were ready! Their local dance studio asked if they would start teaching classes. So they took a private with another French pro to learn the basics and turned around to teach a yearlong lesson series. "I apologize to anyone I taught in my first year!" Philippe laughs. "Seriously, I knew nothing. We did our best." It's a story that should warm any community organizer's heart. So often, we have to learn from whoever is just a few steps ahead of us. Philippe and Flore took that responsibility seriously and worked hard to level up their dancing even while they immediately passed the knowledge on to beginners.

Now, Philippe describes his teaching style as, "excited and animated! We don't usually teach a lot of fancy moves. It's more about how to find your own moves, how to use technique better," he said. "It's about the fundamentals." He also acknowledges that a common theme in his teaching has come from Flore. "Don't be afraid to be yourself! Workshops help you practice believing in yourself. No matter what level you are, you can sell your thing!"

What is he most looking forward to about Camp Westie? "Being in the woods! And spending the time to exchange with people, being able to once to talk to all the people. To know the people who are actually there. Usually, I can only say hi to everyone and not knowing them and there is no time to talk. I will know everyone's names!"

It's one of our favorite things about Camp Westie too, how it's small enough to actually know everyone's names and know our pros the way we know our friends.

Join us this year for the fourth ever Camp Westie!