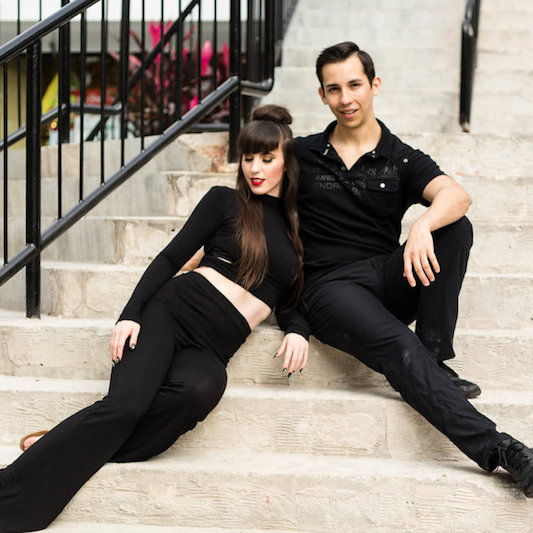 "I Never Do Anything Halfway"

"Dance saves people. I know that sounds dramatic but it does," Stacy Kay reflected. "We're the land of misfit toys and west coast swing is the place we belong."

West coast swing is the dance many of us find after some big change. Maybe we left another dance style. Maybe we left a relationship or a home. It's where we find ourselves when we don't quite fit the story anymore. And it's where we found a community to help us through. Stacy sees her work as giving the support and coaching that she received as she found her way to the life she wanted to live. She said, "My favorite thing is to watch people transform into the person they always wanted to be, not just in dance but as a person. I don't know how, but dance transforms people. It transformed me."

That transformation led Stacy Kay to become a world-renowned dance professional. But Stacy had no vision for this life growing up, not even when she took an unexpected first step towards it by quitting gymnastics at age 12. At that point, she had lost hobby that had defined her life till that point. "All teenagers want to change what they know and what they've done before," Stacy said. And it was then that dance showed up. "My friend insisted that I learn some of her choreography for a pom routine, a type of cheerleading. And I was super reluctant but then I ended up loving it!" But she quickly realized that it wasn't the cheer part she loved but the dance routines they'd perform.

As Stacy said about herself, "When I do something, I never do it halfway." Within a few weeks, she was signed up for all of the classes at a local studio, spending three to four hours after school training. She was hooked. She loved the discipline of technique mixed with creativity. She loved being on teams and wearing costumes that put gymnastics leotards to shame. "And I could dance with my hair down!" Stacy said.

It was at a dance competition that Stacy found her way into partner dancing. Stacy talked with a Fred Astaire vendor and wanted to learn more about ballroom. The contract would both train in the dance and give her a chance to teach. Her mom said she could start teaching once she got her driver's license. Six months later, license in hand, Stacy drove to the dance studio and signed up.

At the end of high school, she had a choice: keep teaching or go to school. She opted for school and chose to study photography. "I really don't know why I chose that particular field," Stacy said. "Maybe it was artistic? I enjoyed it." She got to learn design and lighting. She got to learn marketing and all the trades that would make photography possible. But it was clear this wasn't what she actually wanted to do long term. Years later, Stacy wonders at times if it was worth the time and money, but she also knows that nothing is ever wasted. It was during this time that she learned the skills she would use as one of the first west coast swing pros to successfully use social media to build a brand. But as a young adult, she knew none of what was ahead. Instead, she took an opportunity to teach dance at a studio an old classmate was opening. It was a chance to do something she loved while she figured out "what to be when she grew up."

That's when she found west coast swing. A student asked if she wanted to go with him to a club and dance. She told him, "Oh I know west coast swing; we teach it in the ballroom syllabus but it's not that great." He said, "No. You need to see a video." While it's not for certain which video she saw for the first time, she thinks it was Tessa and Miles Cunningham. She thought, "Oh my god, I've never seen this. I want to do this!" So she went out that night to a hole-in-the-wall bar in Tulsa wearing her ballroom teaching dress and learned the sugar push beside the pool table. "It was a genuine introduction from the good ole days," she said. Stacy was officially addicted and danced it as much as she could.

Stacy wanted to understand everything about the dance and took every chance she could to experience it more. So it made sense when she decided to go on a dance cruise in the Caribbean even though she'd never left the country before much less been on a cruise. In fact, she wasn't even sure she was going to go but her mom said, "Do it!"

On the plane to Florida, her friend realized he forgot his passport and wouldn't be able to go. Again, Stacy considered not going. Why would she go on a cruise when she didn't know anyone at all? Again, she called her mom and her mom said, "Do it!" So Stacy got on the bus that would take them to the ship.

And it was on the bus that Dance Fate made Her move. As Stacy got on the bus, she saw a super cute guy and, "almost broke my neck trying to turn around and look at him," while she made her way to her seat. He made eye contact. Smiled.

Within 36 hours, there was clearly something happening between the two of them. They spent the rest of the cruise hanging out and goofing off and going on excursions and dancing. That was in 2012. A year later, Stacy picked up her bags and moved to Florida to be with him.

The rest is history.

Together, they've built what has become an iconic partnership and relationship in the west coast swing world: dynamic, ambitious, hardworking, driven, and charismatic. They've accomplished so much as a team and decided to launch their next big dream by opening a studio, District Dance Academy, in Clearwater, Florida.

To Stacy, District Dance is their response to how hard it is to learn west coast swing progressively, a chronic community problem. "Our dance has the same structures that other dances do: timing, posture, musicality," Stacy observed. "But it's so unnecessarily hard to progress in a coherent way through the skills you need." Her big dream is to create a systematic introduction to the essential dance skills that underpin great west coast swing. And with known names like Stephen White and Brennar Goree making District Dance their home studio, Hugo and Stacy's studio is poised to be a training destination for serious west coast swing dancers. This is especially true because of the caliber of cross training opportunities offered at the studio. Stacy's early years in gymnastics gave her a deep love for technical mastery and rigorous training that informs how their partnerships chooses to study solo dances to bring depth and nuance to their performances.

One of the roles Stacy plays in this work is that of Storyteller. This is what she does as the primary voice behind the social media presences for both their partnership and their studio. If you've ever been inspired by their Instagram posts, you know what I mean. [Here's one of our favorites from this last Open Season.] Stacy has an incredible writing voice that brings you right into the moment and into your own process. Her communication style is a big part of why Hugo and Stacy are so visible and why building a studio is a viable option for their careers.

This storytelling instinct is also key to how Stacy approaches her art. She said, "I take the most pride in my dances when someone says that I conveyed everything that was happening in a song. I want them to feel like I was remixing the music for them through my dancing. I want someone to feel what I was feeling just by watching me." And the way she achieves this connection is through Story. When she steps on the floor, she's immediately looking for it in the lyrics or the music. A world is painted for her and everything fades away. It's how she becomes still and sees. She said, "The dance is what's happening in my heart and my mind; I want to take people on a ride with me when I'm dancing. Be moved to tears or laughter or whatever because it connects you with your own experiences. That's the goal of a performance: to bring you with me."

We're grateful that Stacy is sharing this spirit with us at Camp Westie this year and joining the adventure of our fifth Camp Westie! Stacy is excited to join the Camp Family and interact with dancers one-to-one, which is totally opposite to how it works at big events where she's teaching, judging, and performing. "It'll be a great shift for me because I'm a total introvert. I usually just love to take in the room and watch what's happening. And I'm excited to experience things differently at Camp." Specifically, she wanted to say that she's been known to have a "resting b*tch face"—her words, not ours! So don't let her expression stop you from talking with her!

Stacy, we can't wait to have you at Camp Westie this year! See you in a April!